The original little girl on a bicycle sketch was part of a series of small concept drawings. I was inspired by a video at the Lake Buena Vista Disney offices. Walt Disney himself talked about a property that they purchased next to Disney World; to me, this new community was the “American Dream.” That small sketch became the logo for Celebration. Twenty-five years later, I was commissioned to create an anniversary drawing. I didn’t have to go far for inspiration, the subject matter was right in front of me; my daughter, Cayli; my son, Joseph; and our dog, Spike.

Celebration Foundation is selling 100 copies of the painting, which are numbered and signed by Michael McCann. See below to view the painting and make your purchase. 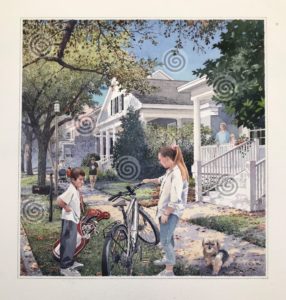 Fill out the form below to purchase the painting.

This site uses cookies to collect a variety of non-personally-identifiable data about your use of this site to enhance your experience. Read more on our Privacy Policy Page.
Go to Top